Posted on March 5, 2014 by Rosalind Williams
Last week (Feb. 26, 2014) I had the pleasure and privilege of giving a talk at the Google office in Kendall Square, Cambridge, Massachusetts (streamed to other Google offices).  I was introduced by Owen Williams (yes, he is a relation), who made the arrangements for the talk.
Here it is on video — a forty-minute overview of TheTriumph of Human Empire. What is missing is the lunch and conversation afterwards—good reminders that history is too important to be left to historians.
Posted in Uncategorized | Comments Off on Going [to] Google

Posted on January 26, 2014 by Rosalind Williams

The Wall Street Journal Online took notice of The Triumph of Human Empire in a review by distinguished environmental historian J.R. McNeill (Jan. 9, 2014):

McNeill points out how many of us enjoyed these writers’ works as children: “Millions of people had their ideas about technology, nature and the human condition influenced by these men.” Reading them as adults, we can also see “how seriously they grappled with the problems of their day.” Their seriousness, however, does not get in their way of telling a good story. “If Ms. Williams introduces one more reader to the remarkable worlds of Morris’s ‘News from Nowhere’ or Verne’s ‘Invasion of the Sea,’ that is justification enough for her insightful book.” (I would add one more title to McNeill’s list: Stevenson’s ‘The Ebb-Tide,’ as compact and grim and memorable as Joseph Conrad’s ‘Heart of Darkness,’ but even better.)

A Book of the Year

Posted on December 8, 2013 by Rosalind Williams

That’s the judgment of The Economist.  I am pleased that it lists The Triumph of Human Empire among the best writing of 2013 in its “science and technology” category, with this citation:

“A magnificent attempt to recapture the sense, so prevalent at the end of the 19th century, that the world was finished, explored and done. The responses of the three creative men on whom Rosalind Williams focuses have strong resonances for anyone who worries about today’s Anthropocene era.”

Posted in Uncategorized | Comments Off on A Book of the Year

Age of the Anthropocene or Human Empire?

Posted on December 6, 2013 by Rosalind Williams

One of the current terms for describing the contemporary world is “the Age of the Anthropocene,” meaning the” age of man” as a new geological age based on an unprecedented human ability to alter the planet.  It is a useful and striking term, but I have always felt its shortcoming is that it reduces human history to a phase of natural history.  Human domination of the globe is also a phase of human history and needs to be examined and understood in this dimension too. This point was made in a terrific review of The Triumph of Human Empire that appeared yesterday in Times Higher Education.

Posted in Uncategorized | Comments Off on Age of the Anthropocene or Human Empire?

Posted on November 22, 2013 by Rosalind Williams

Today, along with every American of my generation, I turned my lonely eyes to Dallas, then to Arlington National Cemetery, and then to the void.  What went to the grave with Kennedy that is still missing a half century later?

The usual answers involve hope, dreams, idealism. You hear them in Kennedy’s 1963 commencement address at American University, where he denounces the  “dangerous, defeatist belief…that mankind is doomed, that we are gripped by forces we cannot control.” He went on to declare, “We need not accept that view. Our problems are manmade; therefore, they can be solved by man. And man can be as big as he wants. No problem of human destiny is beyond human beings.”

Soaring rhetoric, indeed—but Kennedy immediately brings it back to earth.  He tells his audience that he is not talking about an  “absolute, infinite concept of universal peace and good will.”  Instead, “Let us focus instead on a more practical, more attainable peace, based not on a sudden revolution in human nature but on a gradual evolution in human institutions — on a series of concrete actions and effective agreements which are in the interest of all concerned.”

Towards the end of the speech, Kennedy presents such a concrete proposal, for a ban on the atmospheric testing of nuclear weapons. The treaty was ratified in early October 1963, six weeks before his murder.

It’s hard to be more pragmatic than that.  What is missing today is not Kennedy’s idealism: in fact, much of today’s political gridlock has been caused by too many ideals, defined as absolute and infinite.  What is missing is the conviction that history provides a medium for human action, a place for humans to work out human destiny.

“No problem of human destiny is beyond human beings.”  When I read these words to my undergraduate class yesterday, I had to admit that I wasn’t sure I really believe them—but I am sure that if we don’t believe something like them, then we are doomed.  This is an existential belief: one you decide to live by, not that you can prove through logic.

What’s missing in our civic life is an existential belief in history. Its absence becomes evident when you read Kennedy’s words—in the 1963 commencement address, in his inaugural address, in his nomination acceptance speech, among many others—where he repeatedly appeals to the lessons of history and the unchanging founding principles of American history.  He is also deeply aware of the radical change in history with the advent of nuclear weapons.

For Kennedy, nuclear weapons are Historical Exhibit A of forces that grip humanity in a sense of doom, because, while human-made, they seem beyond human capacity to control.  Today, the prime exhibit is climate change—also a human-generated problem, also one threatening life on the planet, also seeming beyond control. Nuclear arms and climate change both result from technological prowess unmastered by historical prowess. So unmastered, technological prowess feels like Fate, dooming humankind.

History has to master technology, not the other way around. Yet Kennedy’s own death began a decline in belief that history provides a reasonable field for action.  His assassination mocks this conviction. Now and then, this event is senseless, random, inexplicable, terrifyingly ambiguous.  How can you work with history when it kicks you down and drags you to a meaningless dead end?

Kennedy would say: an early grave was my fate, but it does not mean that mankind is ruled by Fate. “No problem of human destiny is beyond human beings.” History can work. Make it work. Get to work.

Posted in Uncategorized | Comments Off on Cold War, Hot Planet

Posted on November 4, 2013 by Rosalind Williams

Posted in Uncategorized | Comments Off on Radio Boston (NPR) interview

Posted on October 27, 2013 by Rosalind Williams

From The Telegraph in the UK:  “A literary history of progress, change and watery utopias is one of the most fascinating books of the year, says Philip Hoare”:

Posted in Uncategorized | Comments Off on A Rave Review

Posted on October 21, 2013 by Rosalind Williams

Here is a quick but thoughtful summary of The Triumph of Human Empire, thanks to Peter Dizikes of MIT News.

Posted in Uncategorized | Comments Off on Brief summary of new book

Posted on October 14, 2013 by Rosalind Williams

Why the big smile? 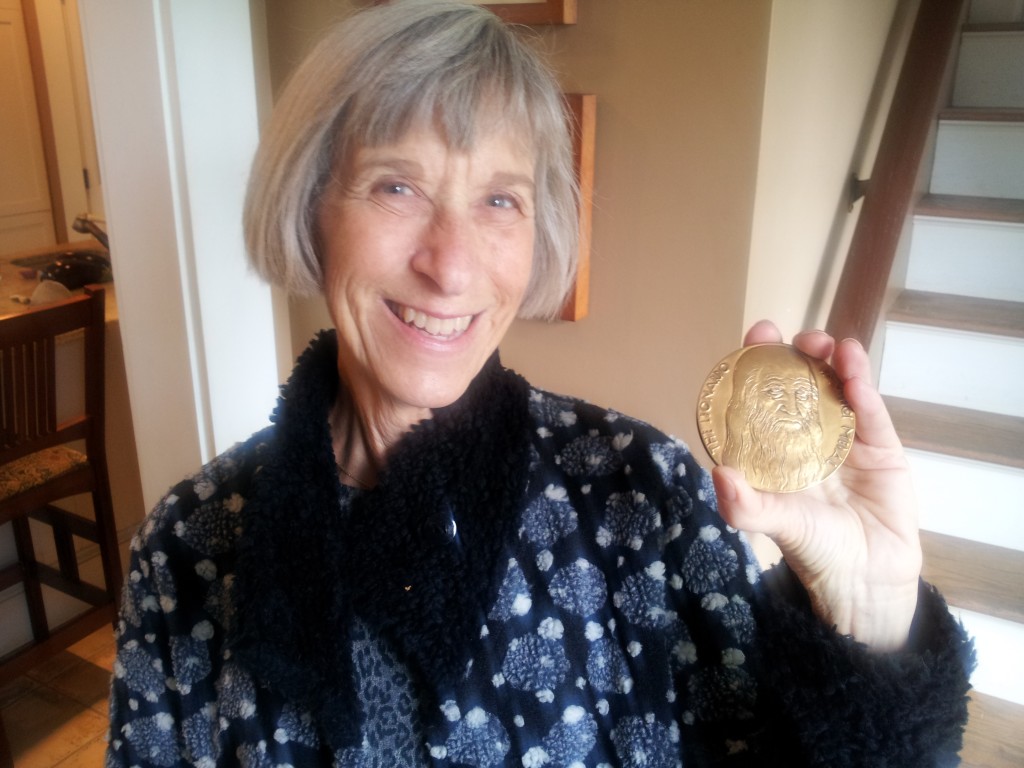 Da Vinci medal, Society for the History of Technology

For being awarded the da Vinci medal (more or less a lifetime achievement award) from the Society for the History of Technology (October 12, 2013).

Posted in Uncategorized | Comments Off on A very happy day

Posted on September 16, 2013 by Rosalind Williams

Leo Marx’s seminal book The Machine in the Garden was published in 1964. (A 50th anniversary celebration will be held at MIT on November 8, co-sponsored by the Program in Science, Technology, and Society at MIT and the Oxford University Press.) This book was the reason I looked up Leo in 1972, when he was teaching at Amherst College, where my husband had a postdoc. Leo and I reconnected in 1980, after he had joined the faculty of the STS Program, when I applied for a postdoc there.

For the subsequent three decades (plus), Leo and I have been colleagues and friends. For the last decade, we have regularly lunched together. In the past few years, his daughter Lucy often joins us: she also teaches at MIT, in the Program in Writing and Humanistic Studies (recently renamed Comparative Media Studies). Our favorite lunchtime topics are family, friends and colleagues, sports, art, and politics, as well as current reading and writing.

This podcast records one of those lunchtime conversations, at Leo’s home in Jamaica Plain in mid-April 2013. Leo had recently read the page proofs of my book, and I wanted to get his response to it. Lucy had also read the proofs and kindly agreed to serve as moderator. She defined the leading questions that launched the conversation and she kept nudging us back to them.

As a result this conversation is similar in tone but considerably more focused than our usual lunchtime rambles. Focused but not formal: you will hear the clanking of dishes in the background.

I am grateful to Leo for agreeing to record our conversation; to Lucy, for organizing and guiding it; to Owen Williams, for suggesting this in the first place and providing technical support; and to C.M. Harrington who did the editing.

00:30 onward
Throughout there are references to Herman Melville’s Moby-Dick and Henry David Thoreau’s Walden. These are editions Leo and I have often used in our teaching:
Also mentioned is Thoreau’s Journal, which he kept from 1837 to 1861—a much less accessible work, since it runs about 7000 pages. Most readers would prefer to begin with one of the one-volume selections on the market. This is one that is especially inclusive.

7:04
William Morris kept a diary of his treks in Iceland that is brief and enjoyable reading.

9:22
The comment to Leo that he also knows the South Pacific refers to his years there serving with the US Navy on a sub chaser during World War II.

20:00
Two non-fiction works of Robert Louis Stevenson about the South Seas—which show his efforts to understand this quickly disappearing world—are In the South Seas and A Footnote To History.

His fictional work echoes the same experiences and themes.

Of this collection I especially recommend “The Ebb-Tide,” so similar in many ways to Joseph Conrad’s “Heart of Darkness” – only in this case the darkness is found on the islands of the South Pacific.

25:25
For an example of Jules Verne’s grim views of what is typically called Progress, see his recently published fantasy Paris in the Twentieth Century (which ends with the city in the grips of devastating climate change).

35:17
The podcast could well end here. What follows is a sort of coda, a too-brief and –inconclusive discussion of science and literature that could well lead to another lunch conversation altogether.

Posted in Podcasts | Comments Off on Introduction: A Podcast Conversation