The Triumph of Human Empire

As explained briefly on the home page, this book is about changes in the conditions of history that have radically altered historical experience in the past couple centuries, and especially since the late 1800s. These changes are ultimately material ones, and there is no shortage of material markers and evidence. The struggle comes in demonstrating that any of them are utterly unprecedented and transformative.

My breakthrough moment came when I was having dinner one summer night in Maine with Leo Marx, as I tried to describe this work to him. He leaned over the seafood to look at me intently: “Then you are writing about an event of consciousness,” he said. Indeed! The integration of many pieces of material evidence, seeing them as an interactive whole, is not a material event at all, but one of human awareness, in this case of our transformed relationship to the planet.

This personal event of consciousness, as it were, made it clear that to write about the historical event I had to go to individuals, where consciousness resides, for evidence and insight. Thus the title of the grand theme of this book—The Triumph of Human Empire—leads to this subtitle: Verne, Morris, and Stevenson at the End of the World. What follows is the foreword to the book that takes it from there. 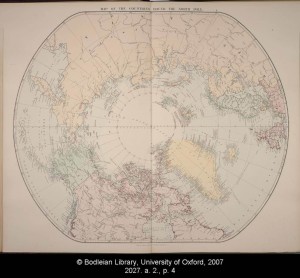 Bodleian Library at University of Oxford

Today we routinely draw upon a familiar cluster of abstract terms to describe this profound alteration in the fabric, at once material and social, of human existence: Globalization, Mobility, Progress, Change, Development, Modernity, Technology, Innovation. They are all dimensions of the larger, longer event of the rise and triumph of human empire. Because that overarching story has so many dimensions and for the most part unfolds only gradually, it may be imperceptible, or nearly so, to individuals during their lifetimes. But even slow changes may quite suddenly crystallize into events of consciousness, when individuals recognize the extent and significance of human domination of the planet…

What do you mean by the term “human empire,” and why does this subject interest you?

I’m borrowing Francis Bacon’s use of the term, from a tale with utopian overtones that he wrote in the early 1600s, imagining the discovery of a new Atlantis. He doesn’t mean empire in the sense of controlling land. He imagines it as the vast expansion of human knowledge and power. In Bacon’s view, and in the view of many since him, this is the goal of humanity.

I research how this expansion of human knowledge and power has changed human history. Think of what one person can produce—and consume—today in contrast to the world before the Industrial Revolution. It is an astounding increase. In addition, the extent and dominance of the human-built world is far beyond anything that existed several hundred years ago. Finally, we are now capable of doing things on earth that were not hitherto possible for humans—for example, beginning atomic processes, or creating new forms of life, or altering the composition of the entire atmosphere…